Home > Outsourcing > The Rise of Legal Operations and What Comes Next 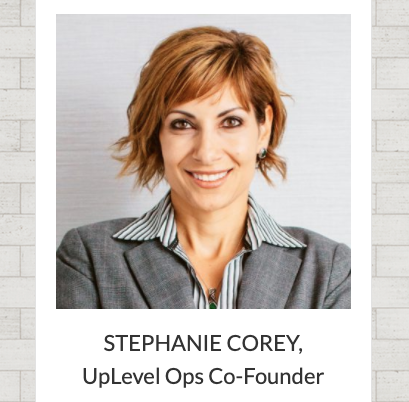 The Rise of Legal Operations and What Comes Next

Legal operations started as a handful of people two decades ago. Today, it has become a robust discipline with many practitioners. I was delighted to have the chance to interview one of the leading legal operations pioneers, Steph Corey of UpLevel Ops.

I met Steph in 2018 doing work for my alternative legal service provider (ALSP) client Cenza. We discussed offshore teams to help with contract management. This year, law departments face new COVID-induced pressures. Contract review and management has only grown in importance, not just to understand Force Majeure provisions, but also as many companies retool their supply chains. Separately, huge cost pressures likely will cause many General Counsels to examine offshore options.

As Steph and I continued talking during the COVID crisis, I realized she has a wealth of knowledge and experience that others would value. In the interview, Steph shares how she got started in legal operations, talks about where it  is today, and comments on AI tools, among other topics.

How did you get into legal operations?

I never thought I’d go into the legal market but here I am. After B-school, I interned at Merrill Lynch and got a job at a small investment firm in the Bay Area. I hated cold calling so did not stay long. In my next job in finance, I was still antsy to advance my career. I learned that HP was hiring for legal tech / legal ops. I had never heard of this, and really did not even know what a General Counsel did. But HP wanted a strong finance background to help manage outside counsel spend. I was 22 and didn’t know how the world worked: I emailed the GC. He called me and then I interviewed and got the job. That was 1999.

You were a CLOC co-founder. How did that happen?

My career at HP kept advancing – the company really believed in training and career progression. In my dozen years in the law department, we grew from 200 to 1,500 people. After I was promoted to Chief of Staff in 2008, I had to figure out what that meant so I started reaching out to folks in comparable roles in other law departments. That’s when I met Connie Brenton and we started CLOC [Corporate Legal Operations Consortium]. I hosted the first meeting at HP in 2010. We found that all law departments were struggling with the same issues – even though their companies were in different businesses. That’s still true. We saw then – and now – that one year it’s e-billing, then CLM, then intake. The cycles continue or repeat.

You were on a roll. Why did you start UpLevel Ops?

The UpLevel Ops story has one more background chapter. In 2011 I was ready for a new challenge outside of HP. I had a brief stint at VMWare, but it was not the right fit. Luckily, right at that time, Jon Hoak took the GC role at Flex. I had worked closely with him at HP. He recruited me to build a Flex legal operations team from scratch. I went from a team of 100 legal ops professionals at HP to one person at Flex.

Jon and I built a team; it was fun and successful. When you have a GC who understands legal ops and provides a mandate with budget, it shows what you can do. We went from a department that only managed outside counsel to a balanced team, bringing about half our total legal spend in-house. We put many systems and processes in place and saved over $7M in just 2 year’s time.

In 2016, two things happened. First, Jon announced he was retiring. I knew that would change things for me at Flex. And second, CLOC came into its own. What had been an informal Silicon Valley networking group morphed: I was amazed with the 500 attendees at the first formal CLOC conference. That signaled a strong demand for legal operations know-how. I saw one other strong signal. During my entire time at Flex, I regularly received calls from law departments around the country wanting to know how to build a legal ops team.

I persuaded Jon not to go into full-time retirement and, instead, join me in starting UpLevel Ops. He and I spent the summer of 2016 on business planning. And we have been going strong since then.

When we started UpLevel Ops, we thought we’d work with larger law departments, say 40 to 70 people. But a little over half of our law department clients have between 10 or 20 people. And sometimes a lone GC. Our model has been to grow with a flexible and agile team. Jon and I are the only two full-time employees. We have a network of many consultants and specialists with whom we regularly work, including Lucy Bassli, Ken Callander, Teju Deshpande and more. We work with a range of industries and law department challenges. For example, we’ve assisted many companies with assessments, legal ops strategies, contract management solutions, and e-billing tech and process.

What’s your take on how AI works for billing and contracts?

I’ve seen AI tools be a big help to analyze and manage contracts. But you still need humans. Very big organizations can invest heavily in tech and machine learning training. That can be great but you need a lot of data – and not just data, but cleaned-up, normalized, and often curated data.

Most of our clients don’t have the scale for that. And most companies don’t have that scale. They can get AI as part of a tool they license or via an ALSP, where the machine the provider has the data and takes care of the machine learning training. And by the way, we’ve found that it takes 10x more data than you initially think to train than you think at the outset. Also, no one, except for NDAs, wants to give up the human QC and exception handling. That’s one of the reasons I was interested to talk to you about Cenza, for access to an experienced team to handle machine learning training, exception processing, and QC.

Where is legal operations as a discipline?

Legal ops continues to advance and mature. We don’t know what long term effects of the COVID crisis will be but the smart money is that GCs will, once again, have to do more with less. That does not mean throwing more lawyers at problems. It just won’t work.

We need to build the right mix of people, process, and tech. On the people side, we need to delegate work to the lowest cost resource who can do it. For example, with crisis-induced pressure, I expect that we will see an increase in the number of paralegals versus lawyers in law departments. And with cuts likely in some law departments and hiring freezes in others, they will need to take advantage of these options and other alternative options.

You and I have talked about Cenza and its offshore teams. Outsourcing and offshoring is proven. And, by the way, outsourcing and offshore is not only about cost savings. For high volume work, say the likely surge in workouts, resolutions will require extracting a lot of data and provisions from agreements. An industrial-strength outsourcing company does that cheaper, better, and faster. And speed will be important to resolve the crisis.

To close, any thoughts on the future of legal operations?

GCs now see their departments can work remotely. Even when the crisis ends, we will see more remote work. And that will help companies because they will be able to tap a national talent pool without requiring relocation.

The common theme among our clients is that they want their lawyers focused on law practice, not on managing systems and processes. They want to delegate operations to the right professionals. Even before the crisis, we had requests for legal operations as a service. Now, that demand likely will increase because companies will not want to add headcount. And we are now able to provide that. With our experience and our networked team, we are well positioned. And I can see how we could call on an offshore team to support data and document intensive work. That might include e-billing review and supporting contract management, both with or without AI.