IBM Watson: The Legal Market at World of Watson Conference

Watson owes its public fame to winning Jeopardy in 2011. What makes Watson special and why the excitement you might ask? I paraphrase here IBM CEO Ginni Rometty’s answers: 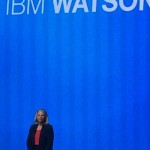 So far, there have been two eras of computing. First was counting. Second was everything we know to date: if that, then this. Watson is third era – cognitive, it learns.  More than just AI, it can augment human decisions. Think of it this way: Watson deals with the gray zones, where the answer is not clear. Watson forms millions of hypotheses and then tests it against many facts and presents probabilities. Health uses in drug discovery, insurers for risk assessment.
[Cite: my post, IBM CEO Ginni Rometty on IBM Watson (Live from World of Watson)]

IBM understands that for Watson to succeed in a big way, the company must fund it and build an ecosystem of developers and other players. In January 2014, IBM launched Watson as a stand-alone business and committed $1B to fund it. It also started developing a robust ecosystem around it: Watson has 250 independent software vendors (ISV), 5000 companies in the pipeline for partnership, tens of thousands developers working on it, and arrangements with  100 of the best universities to work with it.

The Deloitte IBM Watson White Paper, Disruption ahead – Deloitte’s point of view on IBM Watson, released just after World of Watson (available here), has a nice summary graphic of Watson:

The Legal Angle at World of Watson

IBM says it wants to sell Watson in the the legal market. In the keynote, CEO Rommity even mentioned ROSS as a partner. ROSS is one of two legal market Watson app that I have seen mentioned publicly. (This Google search yields several hits about Ross.)

The other use of Watson in legal, not mentioned at World of Watson, is by LegalOnRamp. It uses of Watson to process and understand high volumes of contracts, which is described in IBM Watson: It’s (Almost) Elementary (Metropolitan Corporate Counsel, 12 May 2015).

At the conference, I was excited when I saw an exhibit booth for GoFetchCode, a product of Engeo. 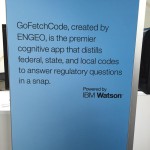 When I saw the placard, I thought GoFetchCode was a legal Watson application. I spoke to the GoFetchCode rep and learned that the system is for California structural engineers to help them find and understand relevant provisions of building codes across the state.  I thought to myself “cool, but very narrow.”

At the end of the conference, I visited again. The GoFetchCode rep shared that many people had stopped by to ask if GoFetchCode would work with other code sets, both public and private (meaning company policies). The rep seemed pleasantly surprised by how many attendees wanted to apply the idea more broadly.

I was not the only at the conference trying to learn more about the potential for Watson in legal. Prior to arriving at the Brooklyn Navy Yard funky venue, I painstakingly scrolled through the entire conference app attendee list to identify other legal market attendees. I found seven and managed to meet all of them. Since the attendance list is not public, I identify them by firm size and position only:

On the one hand, given that IBM says it wants to pursue the legal market, I was disappointed not to see a more visible presence of legal applications at the conference. On the other hand, knowing that ROSS and Legal OnRamp are at work with Watson, even if not at the conference, is a good sign. Moreover, that several Big Law managers and one partner attended is a good sign.

In part II of this post, I will report on legal market reaction to Watson beyond World of Watson. That will include recent survey results, the view of two large law firms, and some thoughts on where Watson could most help in the legal market. 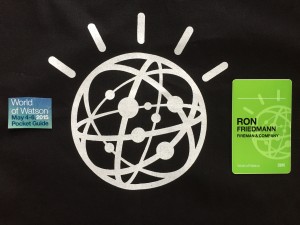 Cognitive Computing in Perspective (Live from World of Watson)