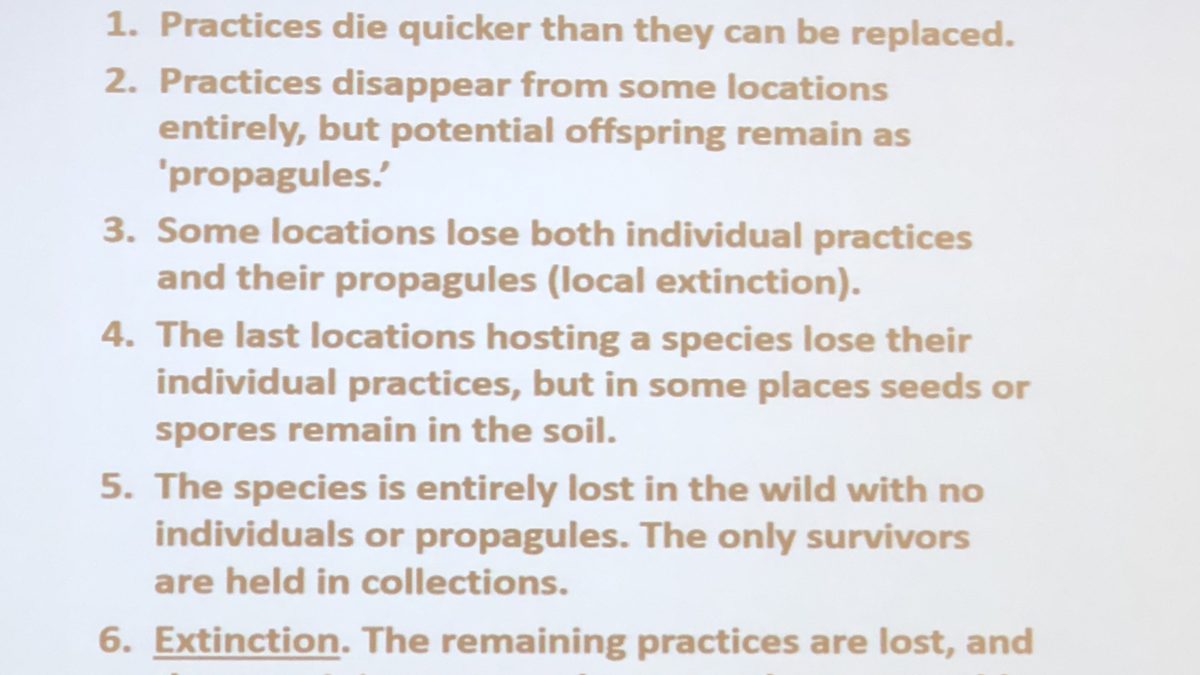 What Blockchain Can Teach Legal About Service Models (Live #ArkKM)

Ron Friedmann, 4 years ago 4 min read 5230
What Blockchain Can Teach Legal About Service Models is a live post from the conference Knowledge Management in the Legal Profession, presented by Ark. I post as a session ends, so please forgive typos or errors in understanding. The presenter is John Alber, Practical Futurist, Institute for the Future of Law Practice. The session description is at the end of this post.
John will talk about the impact of blockchain on how we make agreements. He’s framing this conversation in terms of extinction, giving examples from evolutions of life on Earth. Talks about ancient fish that is very slow to evolve – once thought extinct but then discovered in 1930s. Argues that the characteristics of this fish, listed in photo below, applies to lawyers.

Key characteristics of extinction as applied to the legal market. For example, Practices die quicker than they can be replaces. Example is document review in large law firms, taken over by LPOs. This happens over and over as technology seeps into other practices 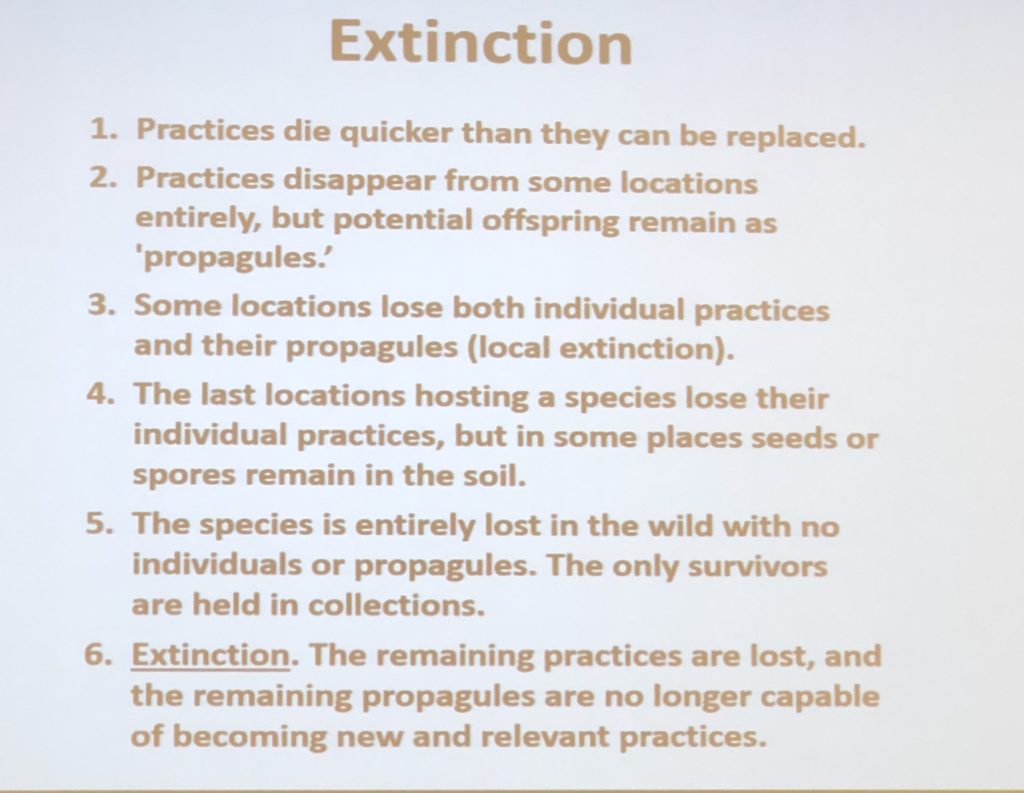 References how law firms have reviewed contracts in the past – with piles of paper and little organization. We accept the inherent inefficiencies as the natural order. Approach to contracts goes back hundreds of years. Many states still require wax seals (RF: wow, that’s a surprise to me). Many statContracts that go awry often give rise to litigation, a laborious process. In insurance, the term “underwriting” comes from early insurers writing under contracts (in 15th century) that they accepted a portion of the risk.

Pivot now to knowledge management (KM)… To get to what’s in contracts, we have to resort to machine learning tools to extract key provisions. John says that this is because we are attached to traditional approaches to contracting. (RF: I argued 15 years ago in Contracts as Code that contract should be a text instantiation of a database or XML record. Today it might be JSON.)

Nick Szabo is the creator of smart contracts for cryptocurrency and other digital exchanges. He wanted to invent a new way of contracting, casting aside that which is not needed. It’s build on blockchain.

Benefits of blockchain for contracting – key characteristics – as defined by Szabo. John says this is creation of a contracting infrastructure, akin the HTTP and TCP/IP.

Here’s an example of contract as code, which John says would take many words in text: 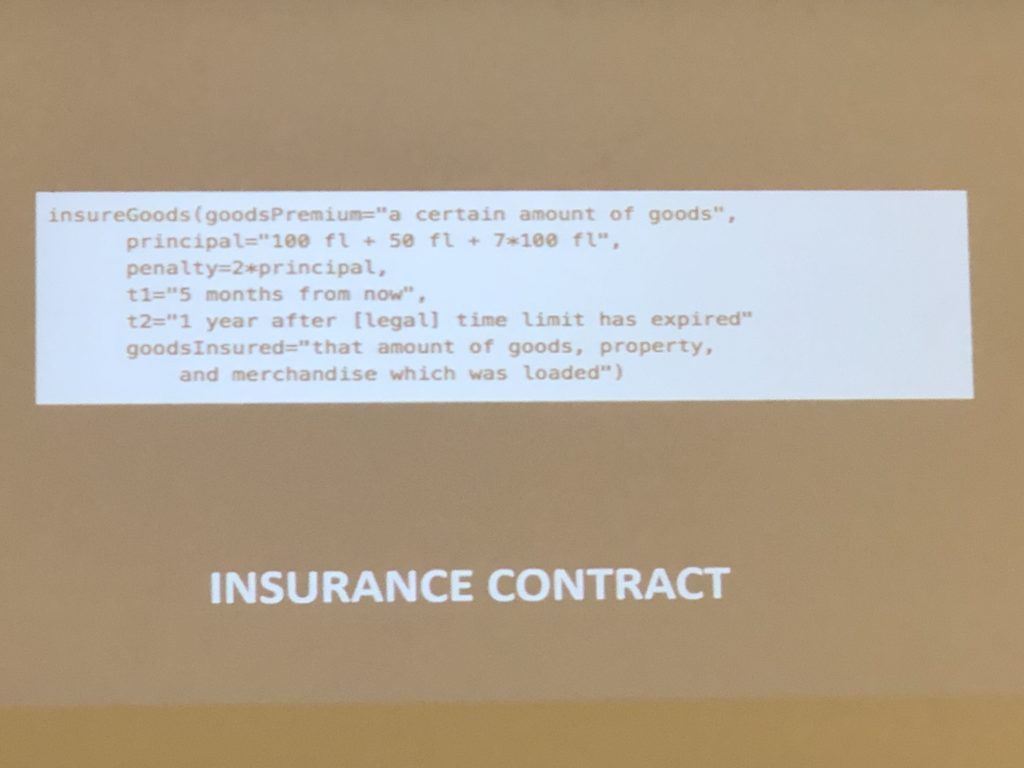 John mentions several relatively new companies that are using blockchain for property sales but says it is still very embryonic. Notes there are still problems to be resolved in using blockchain commercially.

Cites Peter Drucker for proposition that if we don’t change, we die. This is why John started with extinction. John says that few law firm management committees are willing to consider real change. This will contribute to extinction. Says that people in this room have a role in changing this.

How do we in legal obtain the required skills to move to blockchain? John says the answer is design thinking (empathize, define, ideate, prototype, test).

Going back to fish analogy, John points out that other fish in legal ocean – companies such as Axiom, Modria, Neota Logic – are designing new models and approaches.  Says KM is a synonym for passivity in the face of extinction – design thinking is a way around this to get around more fundamental problems.

What Blockchain Can Teach Legal About Service Models

Blockchain is all the news now in legal. It is said to be transforming trust relationships in everything from land titles to securities transactions. And smart contracts are the talk of the town. But shouldn’t blockchain also teach us something about what we missed along the way? How we record, transact and enforce agreements has been a constant almost since the inception of the common law. Yet we let the digital age be born and grow to maturity without ever considering that perhaps our paper‐bound and extraordinarily ineﬃcient service model for managing agreements might need changing. It took computer scientists to reimagine how to make agreements concerning digital assets. With the digital age exploding around us, what else about the law needs reimagining? Everything? Where do we begin? What do we have to learn to continue to stay relevant? And does KM need reimagining too? Is it also a relic from another age?

The Netflix Way: A Data‐Driven Approach to Engagement (Live #ArkKM)