Home > Innovation and Change Management > Our Perception of Change 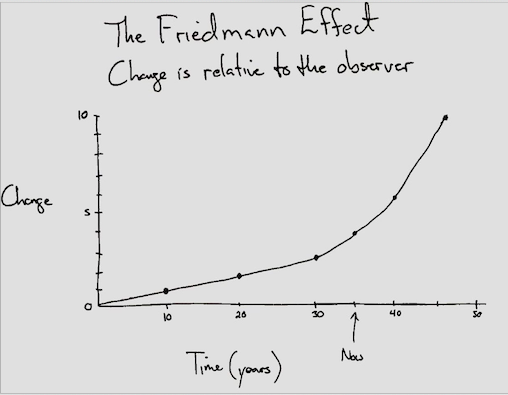 Our Perception of Change

Many discussions of legal market evolution or revolution (AKA disruption) miss a key element: our perception of change. This hit home last week in a fabulous Twitter dialog that I had with Jason Barnwell, Assistant General Counsel, Legal Business, Operations, and Strategy at Microsoft.

In response to one of my Tweets, Jason hand-drew a diagram that uses simple math and a graph to explain how our perception of change can differ. (Our Twitter dialogue appears at end of this post). Here is Jason’s drawing with my typed version of his legend below:

Beyond explaining how our perception of change differs, Jason’s diagram illustrates the value of math, charts, and visuals. His elegantly simple visual display drew far more likes and ReTweets than most legal tech Tweets that I see, and indicator that it grabbed attention. It wonderfully illustrates a point I made in my recent post about the importance of visual intelligence and echoes my like for curves, to wit, my 2019 post on The Big Law Service Delivery Curve.

I hope as lawyers see more diagrams, they embrace math and charts as a way to understand and persuade. Today it seems many fear both – and that is a risk. As Stephen Embry points out in a two-part post last week on lessons for lawyers from CES, leading consumer companies understand the need for visuals, especially video, and storytelling. Lawyers who fail to perceive the cultural shift to the visual, who remain wed to text and only text, may find they play a diminishing role in the 2020s.