Is Big Law Having Its Kodak Moment?

A recent report suggests Big Law is having its Kodak moment. Before the turn of the century, “Kodak moments” were good. That successful marketing slogan prompted many snapshots.

In January, Georgetown University School of Law and Peer Monitor released their latest annual report, the 2016 Report on the State of the Legal Market. I agree with its conclusions: law firms must change what they do to preserve profitability and marketshare. I take issue, however, with its Kodak analogy.

The report introduction, The Dangers of Success, describes the fall of Kodak. Though the company invented the digital camera, it failed to bring it to market in time. It saw no need to do so with photographic film so successful. The report notes

“This story of the demise of Kodak is an important cautionary tale for law firms in the current market environment.”

Is the legal market really at its Kodak moment? Flat demand and price pressure hardly count as threats of extinction. Law firms may hurt but the market has yet to discover a full substitute for them.

A Kodak moment for the legal market would mean a distinctly different yet viable full substitute for law firms. In my view, the substitutes today look quite similar to the firms. Law departments bring work in-house. They operate largely as do firms. Alternative service providers (e.g.,  document review companies and LPOs) take share from firms. They do tasks similar to law firms, with lawyers, arguably more efficiently. These difference seem minor compared to film versus digital.

Dire analogies can conceal the truth. Big Law’s loss of share reflects old-fashioned sourcing decisions, not fundamental shifts. A fundamental transformation would eliminate large swaths of legal work or replace lawyers with technology. We have not eliminated legal work nor has technology dramatically affected lawyer work (outside of document review in discovery).

“Since 2008, the market for law firm services has changed in significant and permanent ways. Clients who previously deferred to their outside firms on virtually all key decisions regarding the organization, staffing, scheduling, and pricing of legal matters are now, in most cases, in active control of all of those decisions. Increasingly, clients are demanding more “value” in return for their legal spend, and by value they mean greater efficiency, predictability, and cost effectiveness in the delivery of legal services. What once was a seller’s market has now clearly become a buyer’s market, and the ramifications of that change are significant.”

I largely agree. But the worry is less a Kodak moment and more how to motivate both law firms and clients to change. Both must work together to focus on budget predictability and efficiency. That means slow and often painful adaptions. Examples include process improvement, project management, budgeting, practice-specific technologies, and knowledge management.

Each change takes hard work and painful re-thinks. Reading the recent Atlantic article What Was Volkswagen Thinking?, I was struck by the concept of how “scripts” govern business behavior:

“Executives are bombarded with information. To ease the cognitive load, they rely on a set of unwritten scripts imported from the organization around them. You could even define corporate culture as a collection of scripts. Scripts are undoubtedly efficient. Managers don’t have to muddle through each new problem afresh, [Denny] Gioia wrote, because ‘the mode of handling such problems has already been worked out in advance.’ But therein lies the danger. Scripts can be flawed, and grow more so over time, yet they discourage active analysis.” (emphasis added)

Both client and law firm lawyers live by the same set of scripts. No wonder change takes so long and moves so slowly. (By way of contrast, note that in healthcare, payor scripts differ from those of providers.)

I think many lawyer scripts are dysfunctional, for example, “leave no stone unturned” lest a minuscule risk be missed. I see a dangerous and damaging script running in the Georgetown-Peer Monitor report itself. It defines productivity as hours billed per lawyer. It takes a powerful script to change the ordinary meaning of the word productivity, which is output per unit of input, to one virtually contrary to the actual meaning.

I emphasize again that I agree with all of the report’s recommend actions for law firms. But a Kodak moment? The economic crisis lies years behind us. If clients were going to switch from film (law firms) to digital (law firm alternatives), then we’d have seen it already. What we have seen, instead, is a slow movement of work in-house and to alternatives. And at law firms, we see the slow march of improving client service, incremental efficiency gains, and more predictable pricing.

Re-writing the hidden scripts that govern the thinking of both clients and law firms will take years, maybe decades. Even if we lose a few firms along the way, a Kodak moment seems unrealistic today.

[This post was first published by Bloomberg Big Law Business as Is Big Law Having Its Kodak Moment? on 26 January 2016] 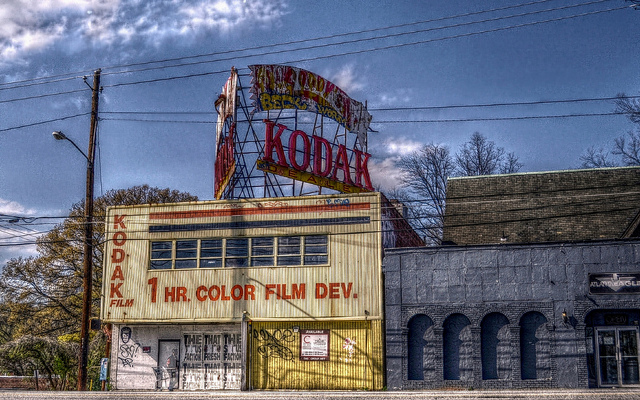