Artificial Intelligence (AI) in Legal – Why the Hype?

I’ve been thinking lately about why there is so much hype recently among lawyers and legal market commentators about artificial intelligence (AI). I was not ready to put hands to keyboard for a full explanation, so on Sunday I recorded a short video on Twitter stating my preliminary views.

It’s always hard to predict reactions to a single Tweet. This video generated a lot of discussion on Twitter and at least one direct reply blog post. I capture here some of that that commentary. By the way, I don’t rehearse my videos and I don’t have notes when I record them. So if you “hear me thinking”, that’s because I am.

[Update on 5 December 2016: I don’t usually update blog posts like this but here, could not resist. In the print Wall Street Journal appears an article today, Artificial Intelligence Makes Strides, but Has a Long Way to Go, that is a good and sober AI assessment.]

I raise the question of why the legal AI hype.

My musings on the legal market hype about artificial intelligence (AI). ISO help to understand that hype. pic.twitter.com/p1aymC71xF

Ryan McClead, who coined argued about a year ago that we should talk about “Augmented. Human Intelligence.” (see here), a view I cite regularly, wrote a 3 Geeks blog post, Why All the AI Hype in Legal? – A Response to Ron Friedmann, to share his views. He says the hype is not restricted to legal, it’s everywhere. Furthermore, we have shifting expectations says Ryan: we keep adjusting our expectation of AI so that it constantly recedes to the future. He cites Google search, Siri, and Alexa of things we take for granted today, that we don’t think of AI, that would have counted as AI not long ago. In sum,

AI is always just beyond the horizon. Just on the other side of the next technological breakthrough. It’s always something just slightly better than what we can do right now.

And he closes with a warning I have conveyed to others: don’t let the promise of magic to come interfere with taking advantage of tools readily available now.

Via Twitter, Brightflag cites its recent blog post, AI and the Law: Hype vs Reality, in response. It makes points similar to Ryan’s and mine.

Key points:
– General rise in hype and we follow people with similar interests, which creates an echo chamber
– Comparing to rise of PC… there was no way we could discuss like we can today. You recorded a video Sunday, now I’m recording a video response. That was not possible until recently
– Decline in skepticism toward technology generally. Before the PC, computers were in big rooms with scientists to run them. Now, we all carry super computers in our pockets. We all believe will AI happen – eventually. People believe we will have huge capabilities in the future
– Tools to actually put AI into real practice are very limited today, so all we can really do is talk about it.

@ronfriedmann <~ what he said.

@ronfriedmann Fear? It sells newspapers to say lawyers will end up redundant. That’s not to say AI won’t shake things up.

thx @NatalieP_Impact; @ronfriedmann I think AI buzz has to do with end running traditional delivery of legal services: lawyer replacement

@ronfriedmann is the hype more simply because we live and work in an overhyped society?

@ronfriedmann Great qu! Wld it be too simplistic to suggest social media and the need for content and ‘column inches’ have driven the hype?

@ronfriedmann I would suggest that AI offers chance to change firm model rather than day to day practice of law. Smaller base to pyramid? 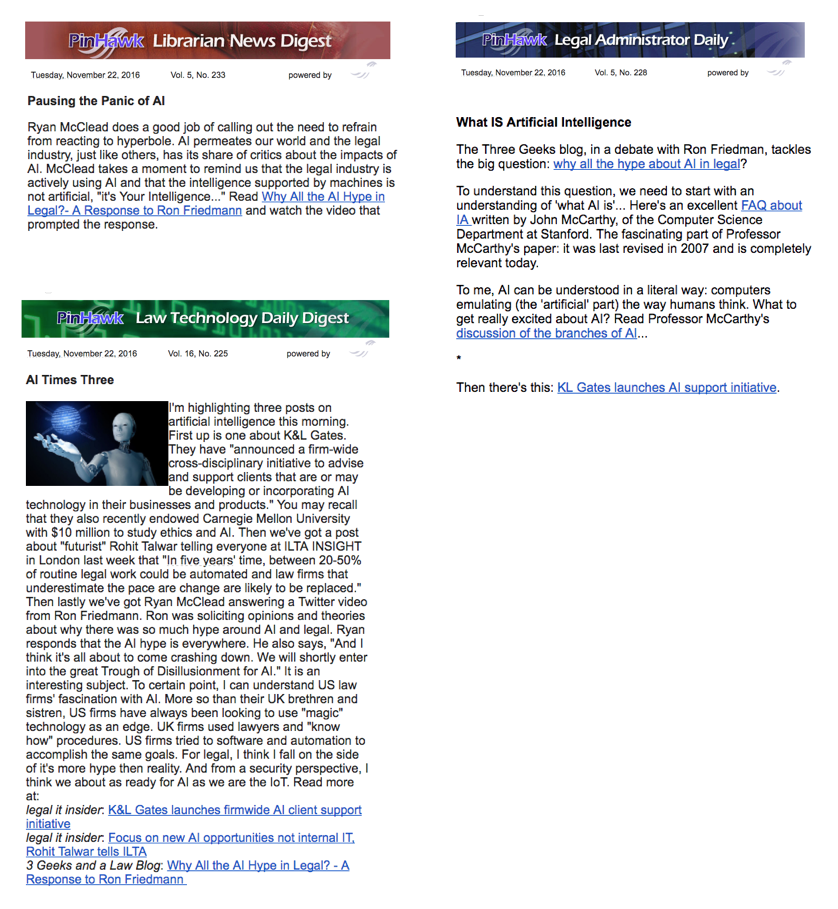 Legal Market on the March