Are Lawyers Getting Dumber? Bloomberg Asks 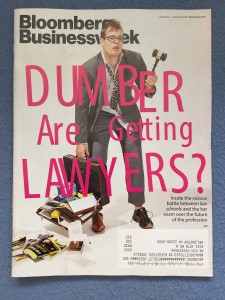 The article describes the dust-up between lesser-ranked law schools and the National Conference of Bar Examiners (NCBE) over the recent decline in bar passage rates.

For those who believe that status quo law school and the bar exam make sense, this is an important article.

For me, this article misses the bigger, more important points. I question two implicit premises of the status quo:

On #1, I have good company judging by the many recent mainstream media and legal publications discussing this question.

On #2, I recognize that passing the bar may relate to law practice ability but am not aware of empirical evidence supporting this notion. Unlike many lawyers, I do not assume that something is right only because we have done it that way a long time. Data trumps supposition, so show me the data.

In my view, we should question the entire regulatory system governing law schools and bar exams. “Question” does not mean abolish. Rather, it means think about what we really are trying to accomplish and whether the mechanisms we have set up align with stated goals. We might find that our goals are misplaced or our mechanisms ineffective. I am not alone in raising this issue. The White House (Department of the Treasury Office of Economic Policy, the Council of Economic Advisers, and the Department of Labor; July 2015) recently released a report, Occupational Licensing: A Framework for Policymakers, that questions professional licensing, at least in some instances.

I fear that this article will, in fueling the fire of the bar passage rate discussions, diminish the public’s share of mind for the far more urgent structural issues of how we train and test lawyers.

Do Large Law Firms Work Differently from Each Other?