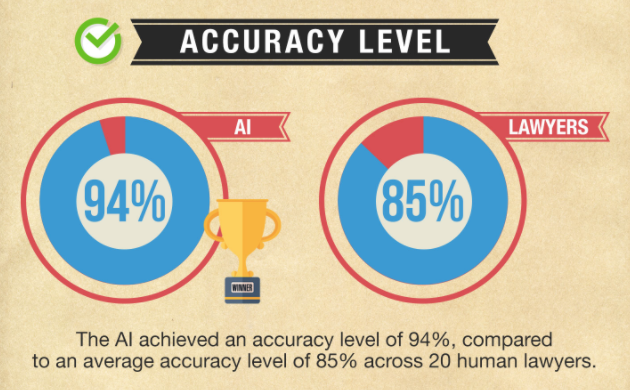 LawGeex, a developer of AI software to review contracts, today released a study that found that AI beats lawyers in the accuracy of reviewing NDAs (non-disclosure agreements).

The LawGeex infographic is at https://www.lawgeex.com/AIvsLawyer/ and you can also download the 37-page PDF study from that page. It’s worth reading. Richard Tromans has a summary and some comments at his post today, LawGeex Hits 94% Accuracy in NDA Review vs 85% for Human Lawyers.

Since LawGeex and Richard both summarize the study, I will cite here only the key finding: that the AI achieved 94% accuracy versus 85% for a group of 20 experienced lawyers. The percentage is the F-measure, which combines recall and precision. This is the standard statistical measure for this type of comparison. Anyone who has followed the discussion of predictive coding in document review in eDiscovery will recognize that metric.

The study is just out and I am commenting without leaving time to let it sit. Plus, I suspect others will comment on it as well. So my views may change but here are my initial thoughts: